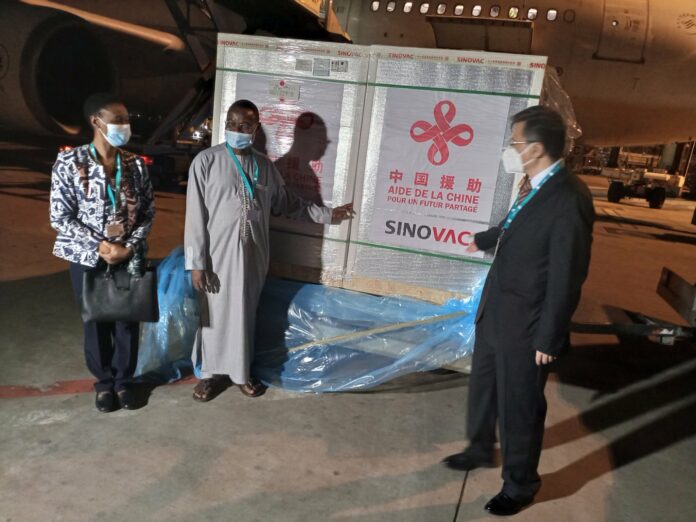 The Togolese Minister of Health, Moustafa Mijiyewa, surrounded by the Minister for Universal Access to Health Care and the Chinese Ambassador, officially received 200,000 new doses of the Sinovac vaccine on Friday evening.

This prize, offered by the Chinese government as part of the Sino-Togolese cooperation, is in addition to the 200,000 received last April.

The vaccines deployed for the vaccination of students in public universities in Togo, will allow the country to further strengthen its fight against Covid-19.

[…] The Togolese authorities received this Sunday, August 22, 2021, 188,370 doses of anti-Covid-19 vaccine, Pfizer-BioNTech from the United States of America. This donation, which is part of the Biden-Harris Administration’s global efforts to combat the COVID-19 pandemic, arrived in the West African country through the COVAX initiative. “The donated vaccines are part of the United States’s commitment to provide Africa with at least 25 million of the initial 80 million doses sent globally. On August 3, the US administration announced that it had finally delivered more than 110 million doses to more than 60 countries. The US government has coordinated closely with the African Union and Africa CDC the country allocations, ”the embassy noted in a statement on Sunday. According to US Ambassador to Lomé Eric Stromayer, these are “safe and effective vaccines, the same ones that have been used to immunize US citizens”. “This donation is proof of the United States’ commitment to be a leader in the world in ending the pandemic. We support the government of Togo in its COVID-19 mitigation mission. I encourage everyone to get vaccinated to protect themselves and their loved ones, ”he added. As a reminder, Togo has already obtained at the beginning of the weekend 200,000 doses of the Sinovac vaccine, also…. […]