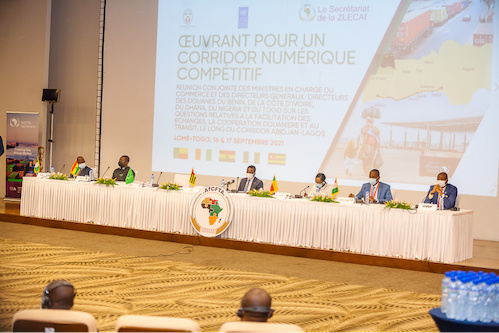 The Togolese capital hosted at the end of last week, a joint high-level meeting on the fluidity of trade along the Abidjan-Lagos corridor.

The event, organized by the Secretariat of the Zlecaf, brought together the ministers in charge of trade and the directors of customs from the five countries concerned (Benin, Ivory Coast, Ghana, Nigeria, and Togo).

For those in charge, it was a question of working on the challenges faced by traders and other economic actors along this road axis, some 1,028 km long, which had to link the capitals of these States, but also and above all to take appropriate decisions. to be implemented for the success of this project.

“The Lomé meeting is a first step in the integration of trade facilitation at the regional level to ensure that the benefits are for our countries, SMEs, transit operators and populations”, indicated during the work, the General Secretary of the Free Trade Area, Wamkele Mene.

A memorandum of understanding supported by the UNDP was, in this sense, concluded at the end of the meeting, with the aim of strengthening the management of the process.

A flagship project of the Program for Infrastructure Development in Africa (PIDA), the Abidjan-Lagos Corridor transports approximately 44 million people and 130 million tonnes of goods each year.

With the upcoming signing of trade facilitation agreements, it is estimated that more than 65 million people are used annually.