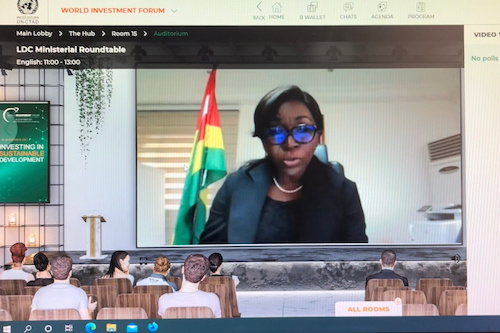 Togo participated on Friday in the World Investment Forum organized by the United Nations Conference on Trade and Development (UNCTAD).

The discussion organized virtually, was attended by the Minister of Investment Promotion Kayi Mivedor, representing Togo.

The summit provided an opportunity to discuss strategies and solutions to address global investment and development challenges. In more detail, discussions revolved around FDI, particularly on their role in economic recovery.

For Togo, which has devoted nearly half of its budgetary revenues to investments, “the importance of continuous improvement of the business climate, through the reforms carried out and the establishment of an economic and logistical framework are effective for boost the priority sectors identified by the State ”, explains the Minister.

According to the government, Togo was already in 2012, the best performing country in Africa in terms of investment promotion, according to FDI Intelligence, a specialized service of the Financial Times.