Togo-Covid-19 : How the government is making vaccination compulsory 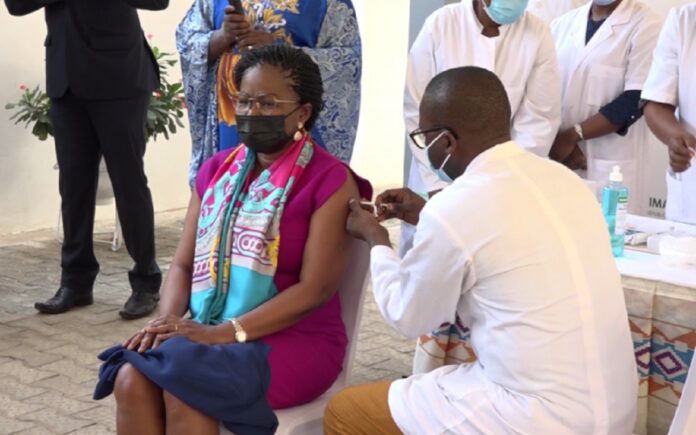 Against Covid-19, Togolese government chooses “an aggressive vaccine strategy”. The Prime Minister even argued in Parliament that it was necessary to play on “fear” to achieve this result.

Vaccinating at least one million Togolese before the end of 2021 is the goal declared by Victoire Tomégah-Dogbé, the Togolese Prime Minister, before the parliament on September 15.

She went there to ask for a year of extension of the state of health emergency declared 18 months ago. An extension that Parliament granted her.

To achieve her vaccination goal, the Prime Minister of Togo defended “an aggressive vaccination strategy”.

The key points of this strategy had been set out a week earlier in a press release.

It is now an obligation for all Togolese citizens to present proof of vaccination to access public administration buildings, the closure for one month of places of worship and large bars in the country, among others.

It is also a matter of strengthening respect for barrier measures by adding “repression.”

Make sure that the Togolese understand that if they do not respect the barrier measures, there will be a sanction “, urges the Prime Minister.

In a word, it is a question of “scaring the Togolese” in order to encourage them to go to be vaccinated, since the strategy based on “the pedagogy” was not conclusive, according to her.

“This strategy, we thought it was relevant, because it makes everyone try harder to get vaccinated. And the result is here today. We see it. And we must not slow down this momentum that we have been observing for two or three days in the vaccination centers, ”said Victoire Tomégah-Dogbé to the Members of parliament.

The Togolese Prime Minister has not escaped criticism. A controversy erupted in the media and on social media because of the remarks she made and the “fear” that she intended to inspire in her fellow citizens.

The opponent and former Prime Minister Kodjo Agbéyomé, currently in exile, as well as the president of the Togolese Party, Nathaniel Olympio, have chosen Twitter to react.

The fact remains that the measures taken are paying off, judging by the large influx recorded since the beginning of the week of September 13 in health centers. To relieve them, the government had to install new vaccinodromes.