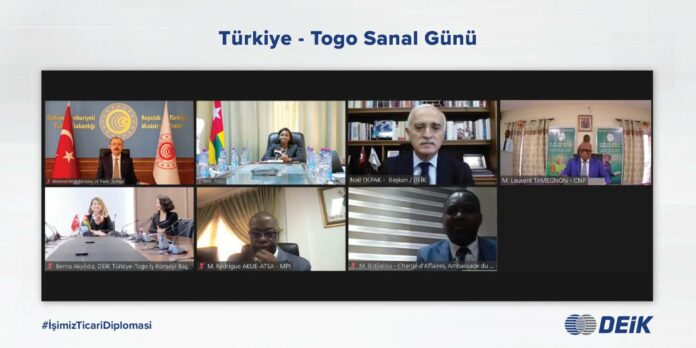 During a virtual meeting, called “Türkiye-Togo Virtual Day”, co-organized on Tuesday by the Ministry of Investment Promotion, the Turkish Embassy in Togo and the Council for Foreign Economic Relations of Turkey (DEIK), a protocol agreement was signed between DEIK and the National Council of Employers of Togo (CNPT).

Togo was represented by Minister Kayi Mivedor for the Promotion of Investment, in front of the key organizations of the national private sector, at this meeting which saw the presence of businessmen from Türkiye and Togo.

Mehmet Muş, the Minister of Trade represented his country at this meeting which was materialized by the signing of a memorandum of understanding between the DEIK and CNPT.

According to the organisers, this agreement will help develop promotional activities, with a view to boosting business relations between companies from the two countries. The documents were initialed by the presidents of the two signatory entities, Mr. Laurent Tamegnon of CNPT and Mr. Nail Olpak of DEIK.

In her remarks, Minister Mivedor recalled that, for nearly two years, Togo and Turkey have been working, with a common will, to strengthen their political and economic relations. And it is in this capacity that the Turkish embassy was opened in Lomé, in April 2021, followed in October of the same year by the visit of President Recep Tayip Erdoğan to Togo.

In the wake of actions aimed at deepening economic relations between the two countries, a delegation of around ten heads of industrial companies from Turkey was welcomed to Lomé in May 2022, in order to create business opportunities and sustainable partnerships with local businesses.

According to Minister Mivedor, in 2020, Togo reached a trade volume of 83.4 billion FCFA with Turkey and Togolese imports from Turkey grew by more than 70% between 2015 and 2019 .

She will point out that Togo is full of investment opportunities in the sectors of water, agriculture, construction, health, extractive industries, services, logistics, telecommunications, among others. Business opportunities that she invited Turkish investors to seize, in partnership with the Togolese private sector.

“I take the opportunity of this event to invite the Turkish Ministry of Commerce to set up a working committee with all the stakeholders in our respective countries, for the materialization of the Togo Investment Forum. -Turkey, as envisaged during the Togo-Turkey political consultations which took place during the year 2022”, she pleaded.

In the same vein, Mr. Tamegnon from the Employers made it clear that Togo has acquired the means to be a host state for foreign economic operators with the most attractive investment code. He will also renew the plea for the opening of a direct line from the airline, Turkish airline, between Ankara and Lomé.