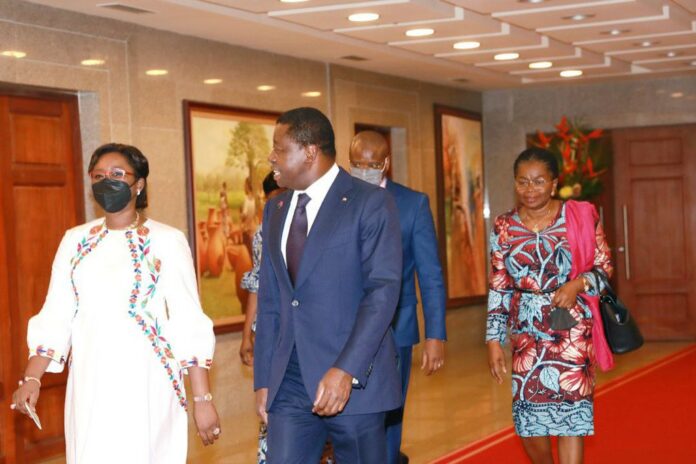 The President of the Republic of Togo, Faure Essozimna Gnassingbé on Friday received the “HeForShe” distinction from UN Women, for his policy of advancement of women, and gender equity and equality.

The act took place in an audience granted at the presidential palace to the regional director (West and Central Africa) of the UN agency, Oulimata Sarr, in the presence of Prime Minister Victoire Dogbé.

The honorary distinction, reserved for statesmen committed to the cause of women in their country and in the world, is according to the institution, the symbol of the Head of State’s commitment to female leadership in Togo.

According to the government, under the leadership of the Togolese leader, the representation of women in decision-making bodies has evolved from 23% of women in 2019 to 35% in 2021.

Above all, leading institutions such as the Prime Minister, the Parliament, the Mediature of the Republic are headed by women, as are a third of government portfolios.

“By receiving his pin as a champion man, the Togolese President joins the very prestigious group of statesmen, heads of state and government who say I support women,” said the Regional Director.

As a reminder, HeForShe is a global solidarity movement led by UN Women for greater equality and gender equity.

The concept aims to involve men and boys in the fight for gender equality and women’s rights, encouraging them to take action against the inequalities faced by women and men. Togo joined in July 2021.